My Surly Cross Check is the longest serving bike in my fleet, coming in at almost five years old--that's ancient in my skewed world. I'd been looking at getting a CC for quite a while, and finally gave up on waiting for some miracle deal and paid full pop ($420) from Speedgoat.com (RIP). Through the years, I've been consistently impressed with the design that went into the CC. Some may complain that it's too heavy, or that the tubing is too stiff (or flexy), or something, but the smartly designed flexibility is something that I've really grown to appreciate as other pretenders to the Cross Check throne have come and gone from my garage.

My initial build is still one of my favorites: 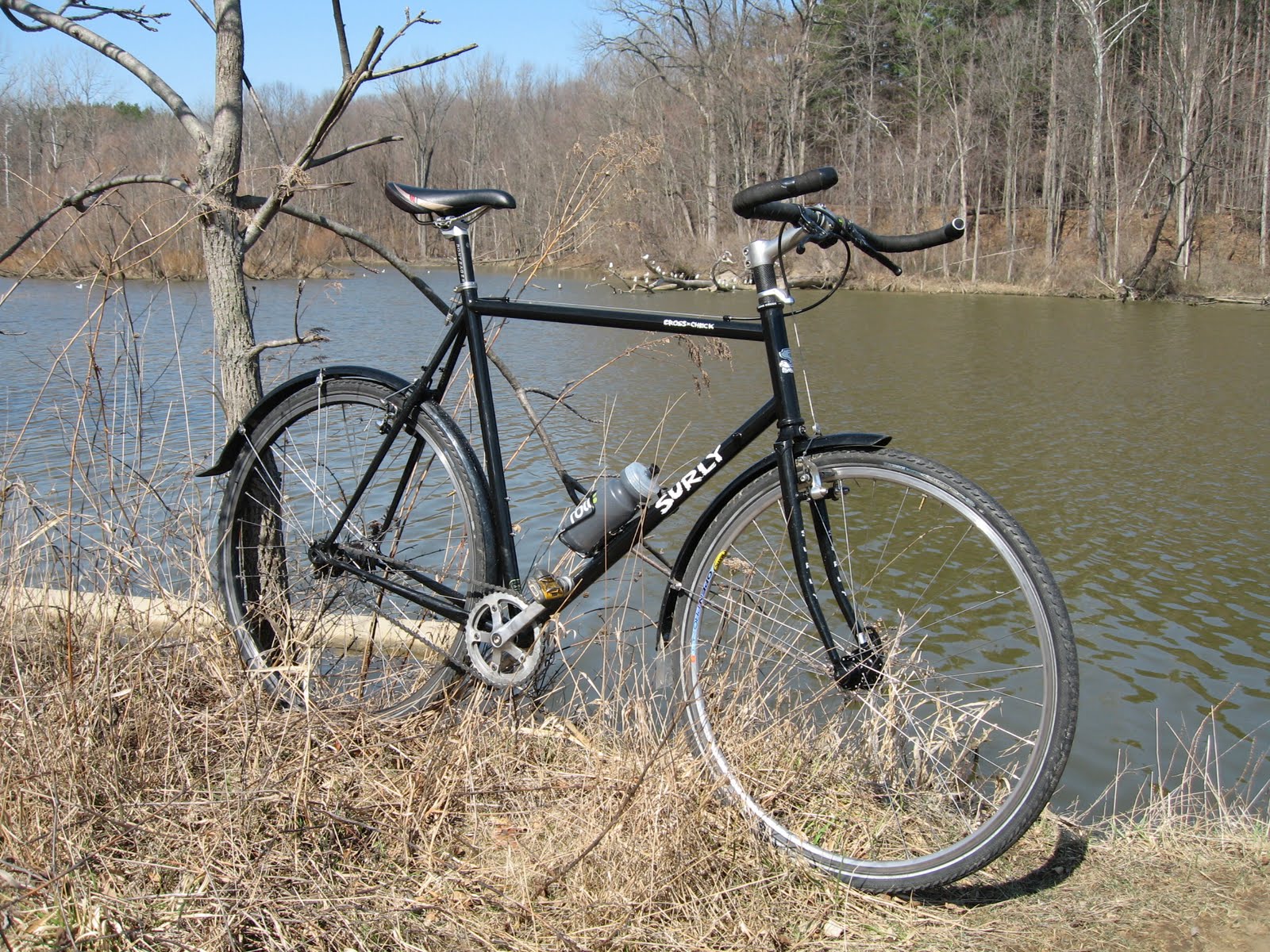 This is kind of my default build: multi speed fixed gear, fenders, widish tires, and an AT-3 style handlebar. I find this type of build good for spirited riding or just bopping around town.

Through most of these builds, I've used the same crank and chainring setup: 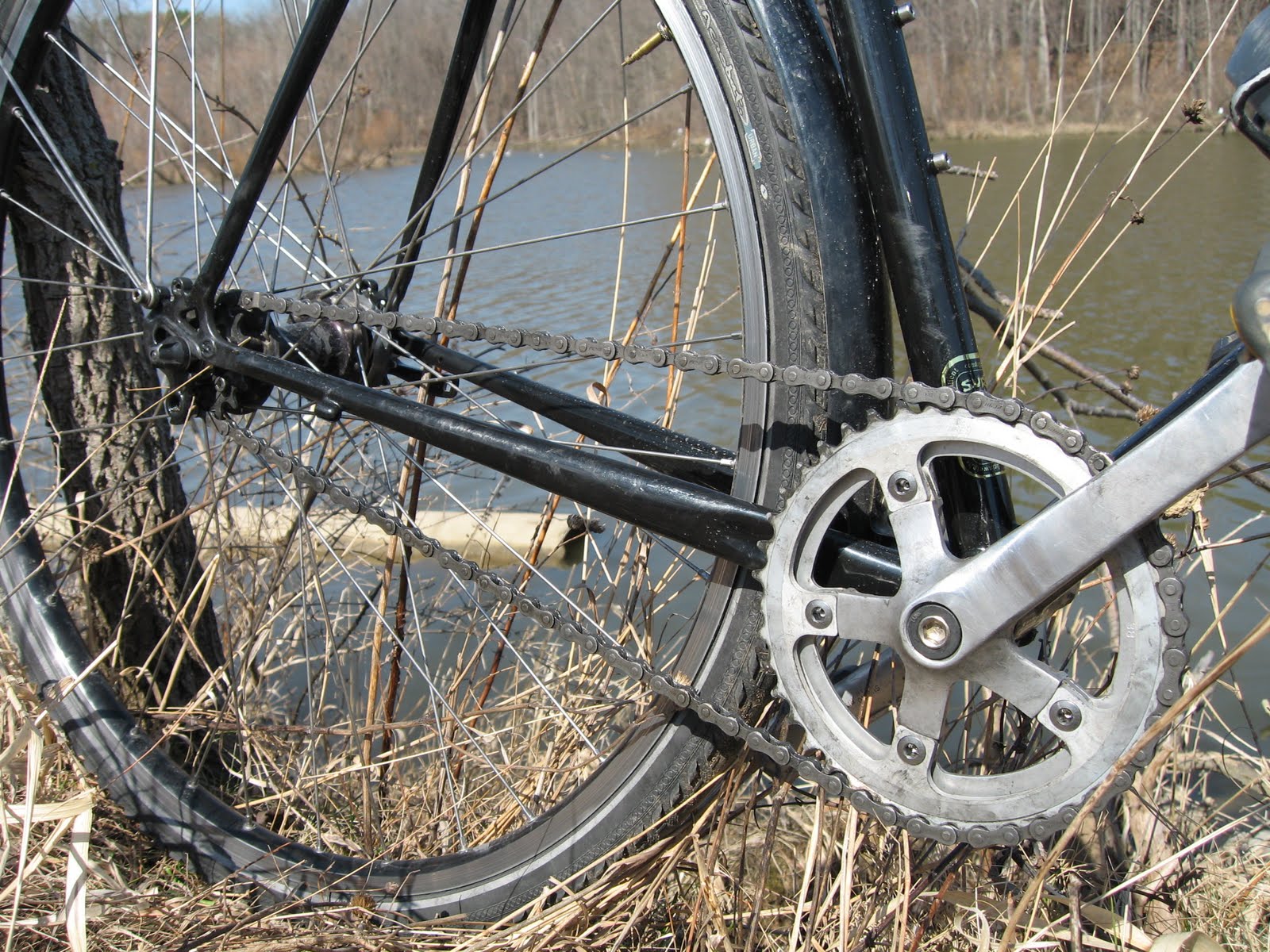 It's  a Ritchy 110BCD, nice low Q factor, with 40/34 chainrings. With a careful chain setup (using a half link), I can take full advantage of the six tooth difference for manual gear changes. With a flip/flop rear wheel, I typically have a 40/16 road gear (fixed or free), a 34/16 middle gear (fixed or free), and a 34/19 bail out gear (freewheel only, using my 16/19 White Industries two speed freewheel). Changing gears--especially if I don't flip the wheel--is easy enough that I actually do it, for instance, when I'm going to be grinding into a long headwind.

Of course, it hasn't spent all it's time with an AT-3 bar. I've had drops on there, like this On One Midge: 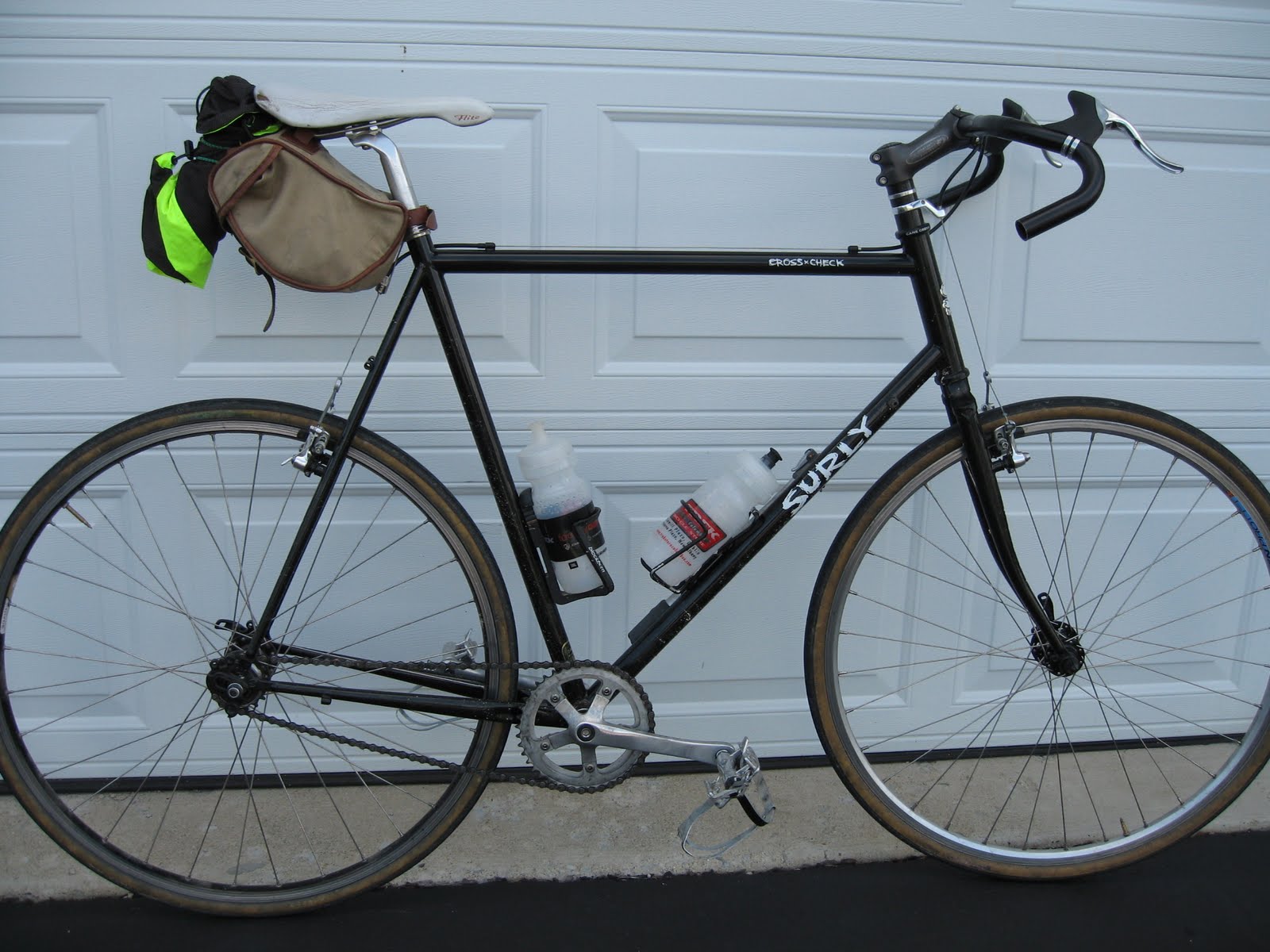 Or this Salsa Bell Lap: 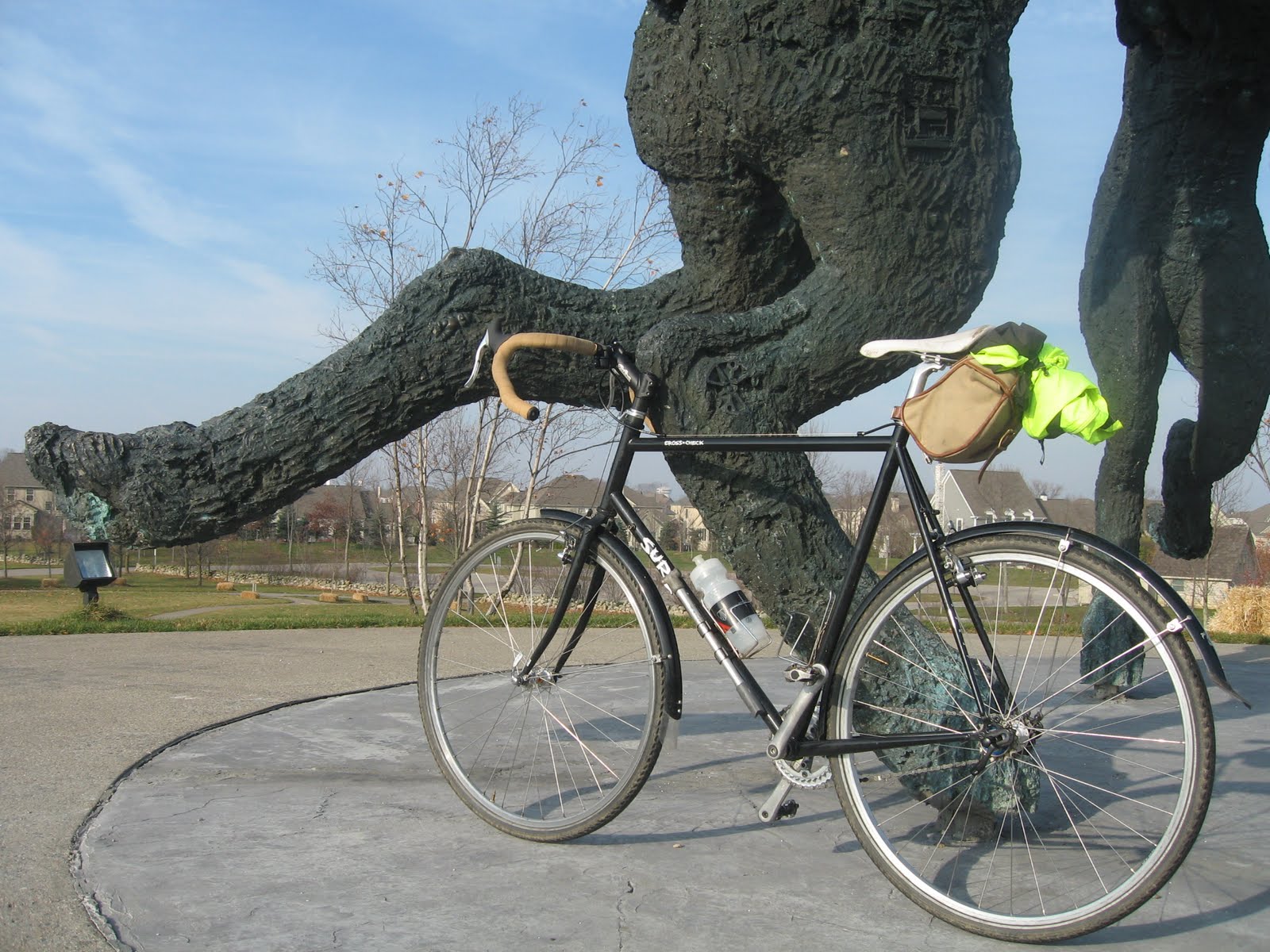 Here's the Bell Lap when I did a 'cross race or two: 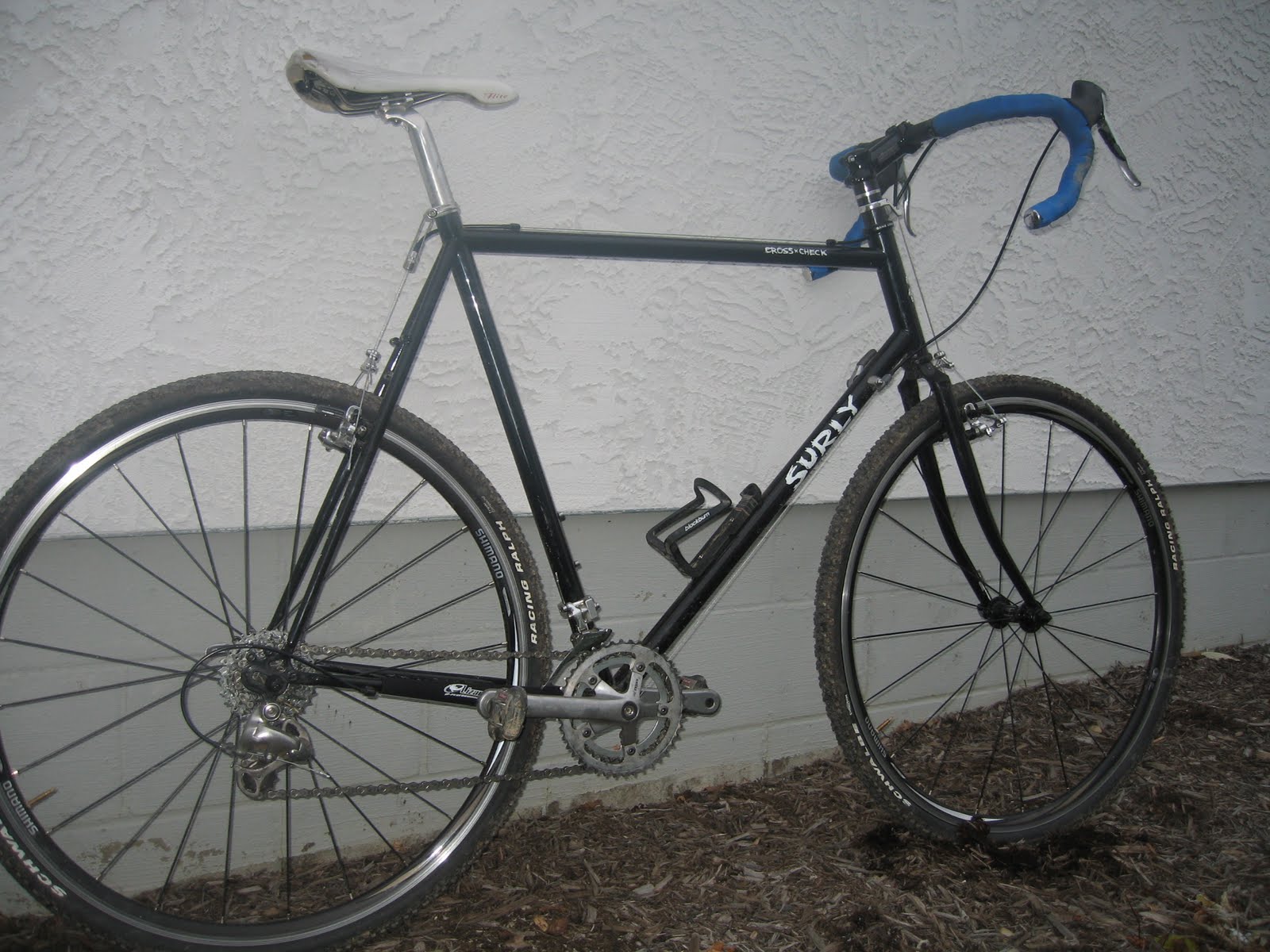 Gears, as well. This 'cross setup is one of the few times I've actually run a front derailer. Most times, I just pick either the 34t or the 40t, and put the chain on that one: 34t for loads or if I'm tired, 40t for faster solo rides.

Below is another 'crossy or mountain bike type setup (yes, I know you can't use bar ends in real cyclocross races): 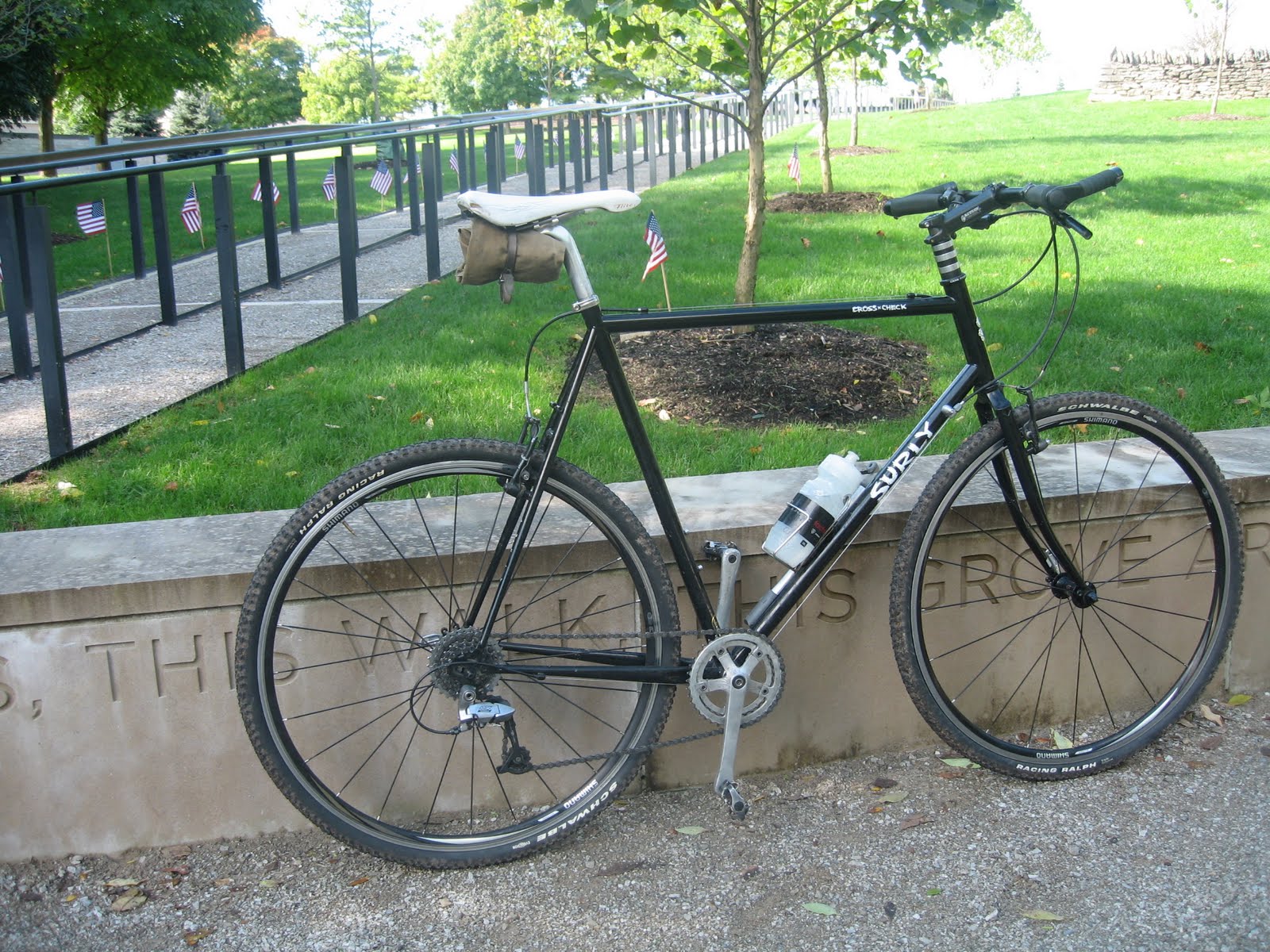 I've also put various multi bend bars on it. With a taller stem, flat BMX pedals, and an upright On One Mary bar, this was a nice neighborhood cruiser: 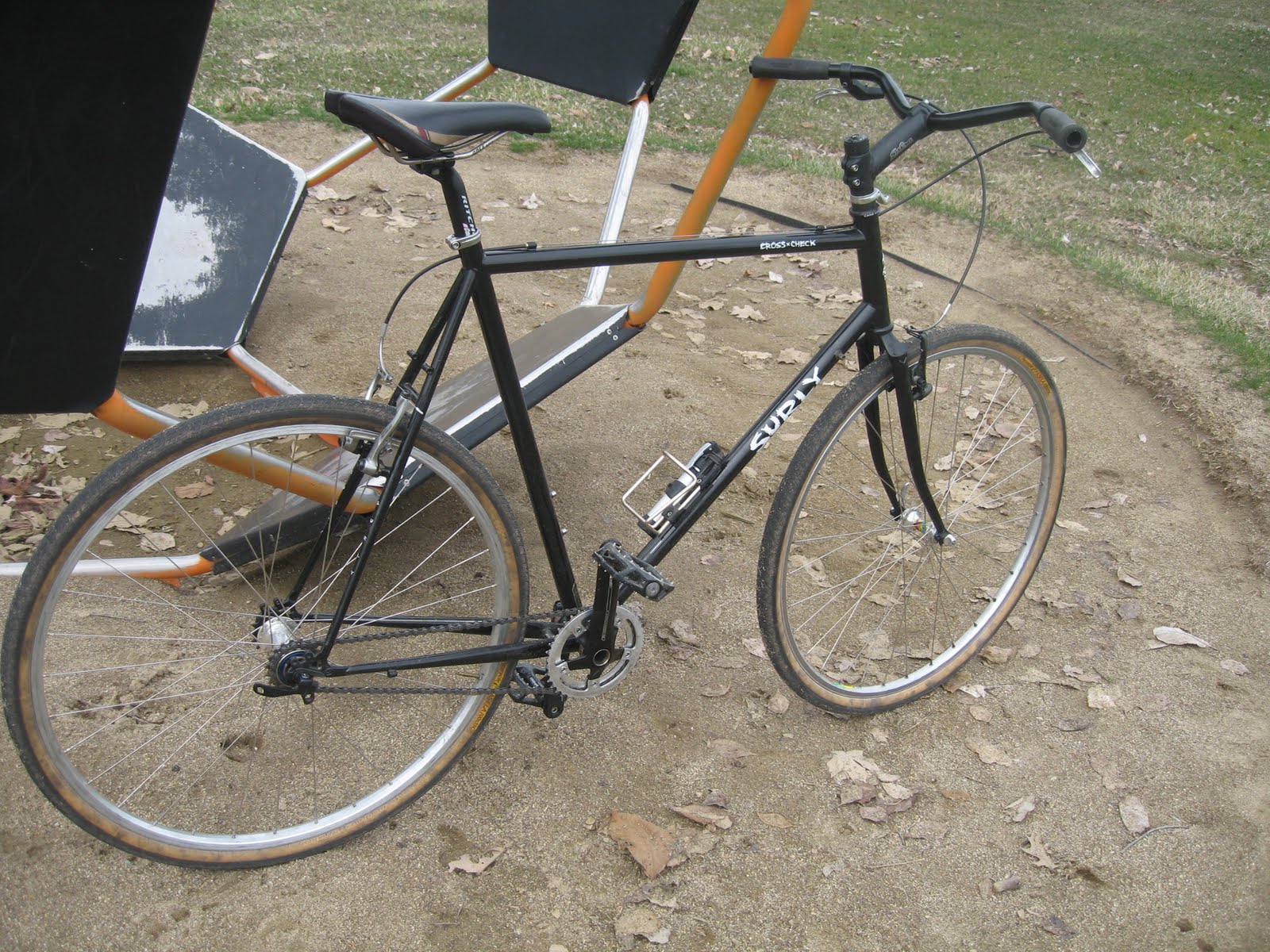 Flip the Marys over and back to a fixed gear: 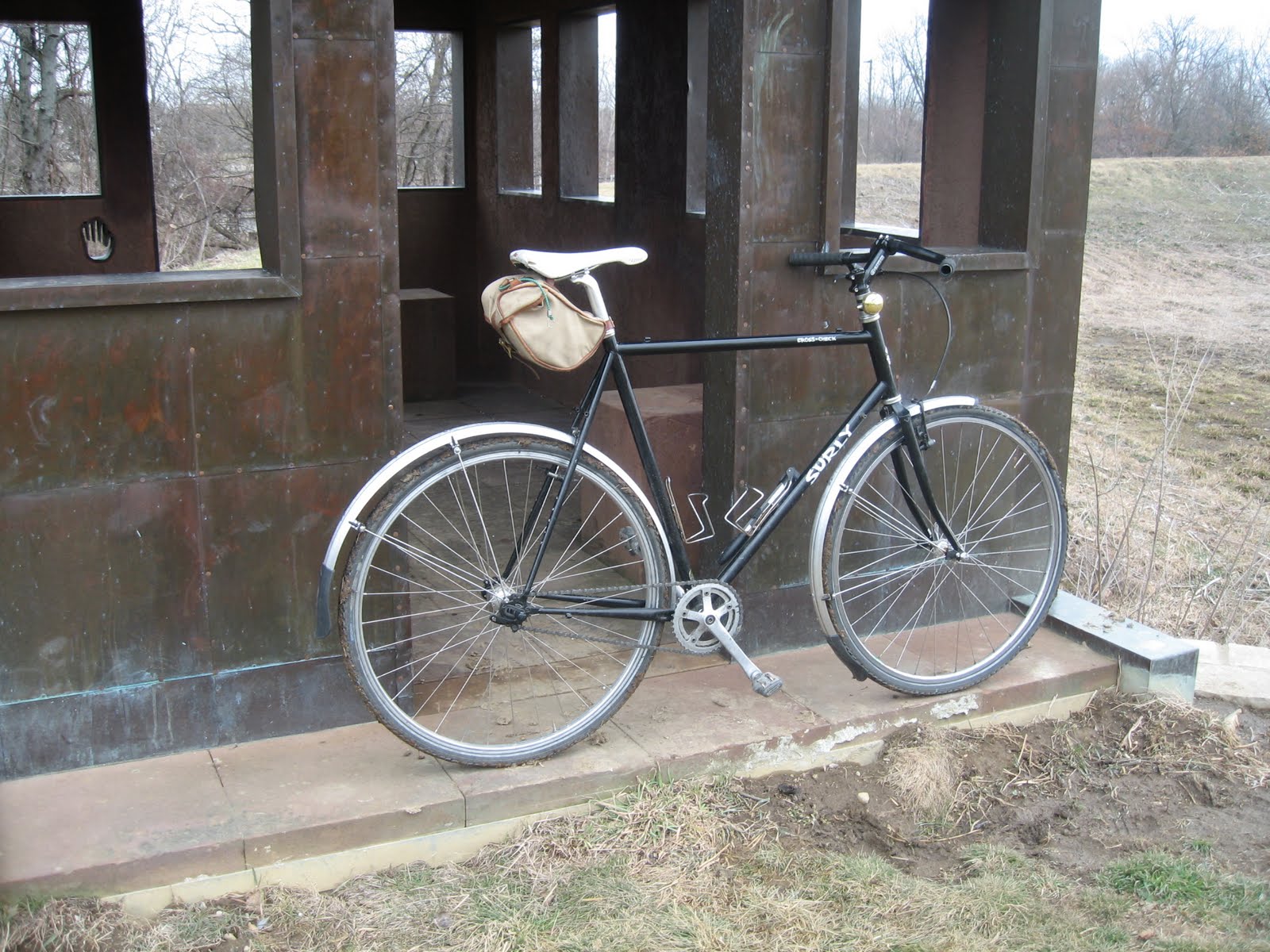 Or a flipped Surly Open Bar: 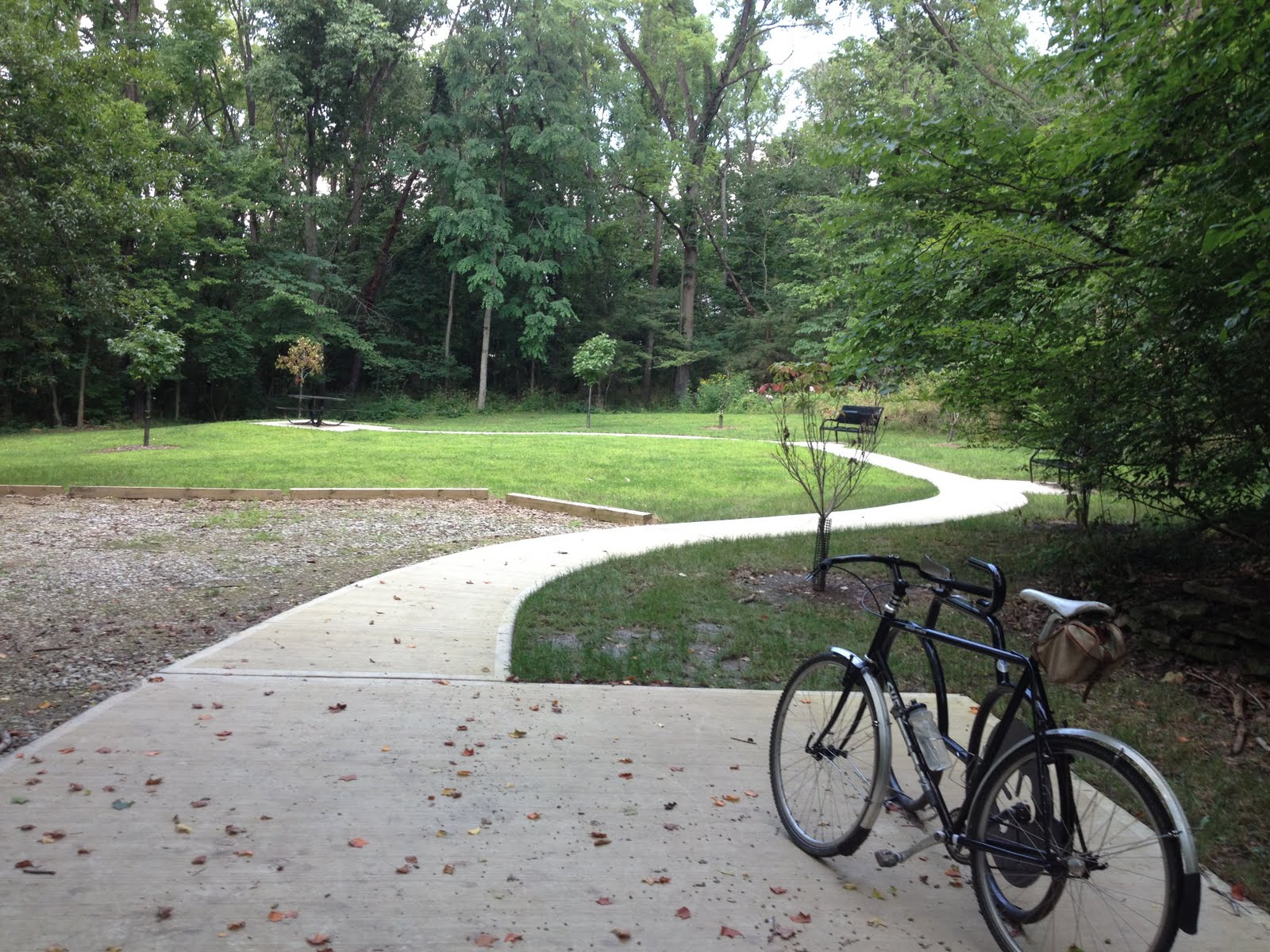 I've done some touring on my trusty CC as well, such as this S24O: 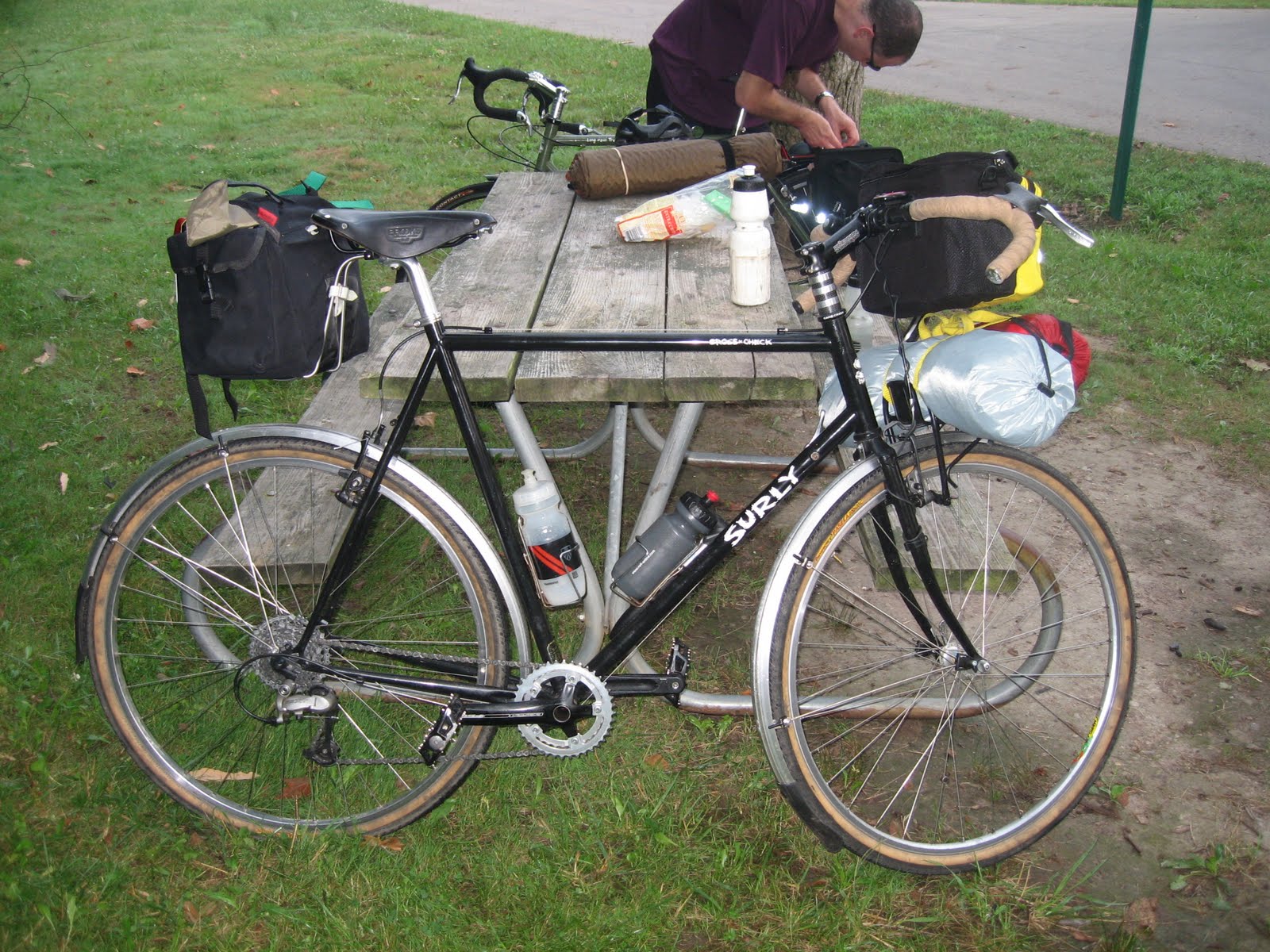 or this trip with Henry, using a Titec H bar: 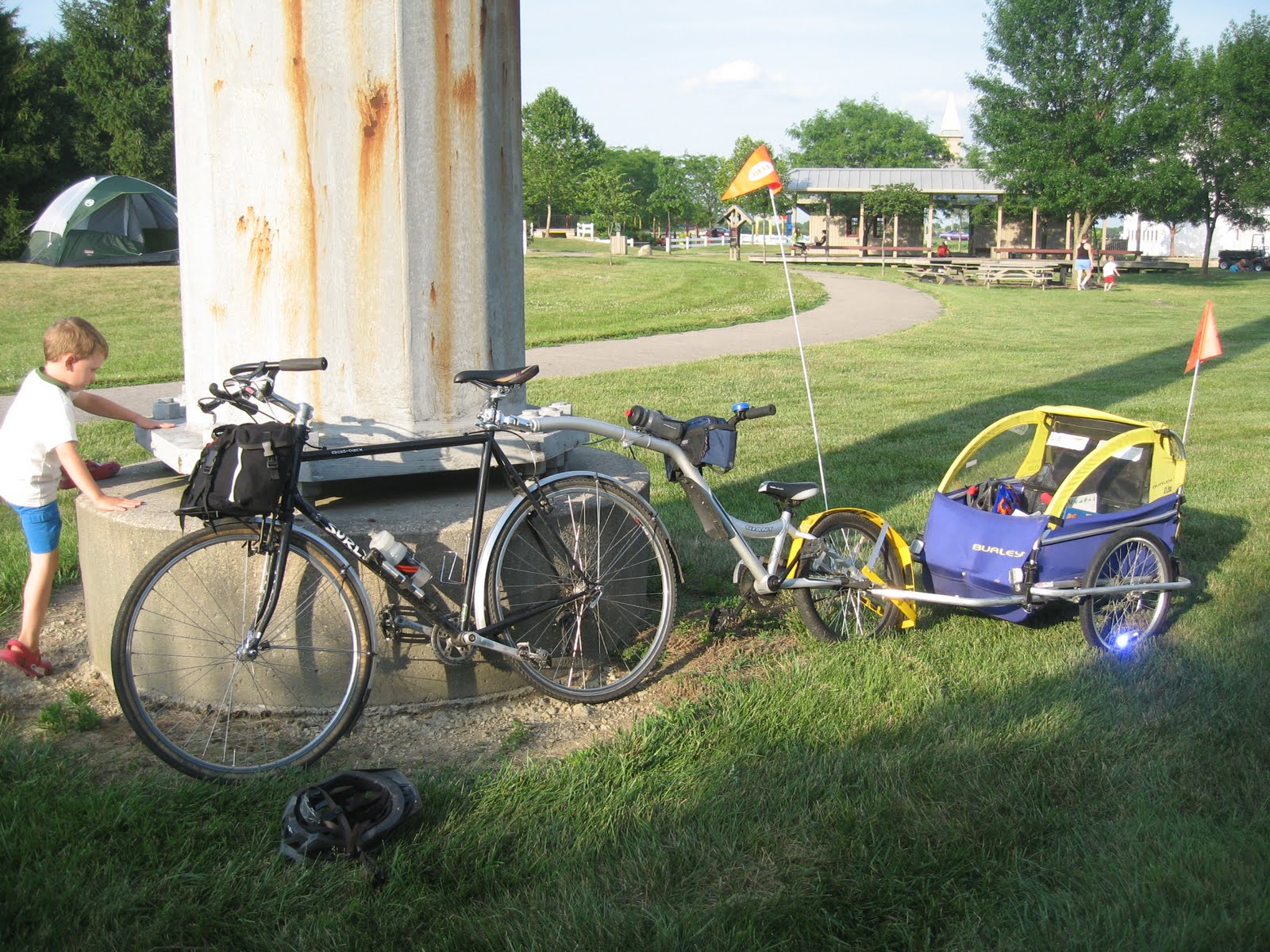 For a while, I experimented with two front end setups. One with a carbon fork, lighter wheels, no fenders, STI shifter, etc, and one with the stock fork, fender, rack, down tube shifter, different bar, etc. I could swap between the two setups in less than 15 minutes: 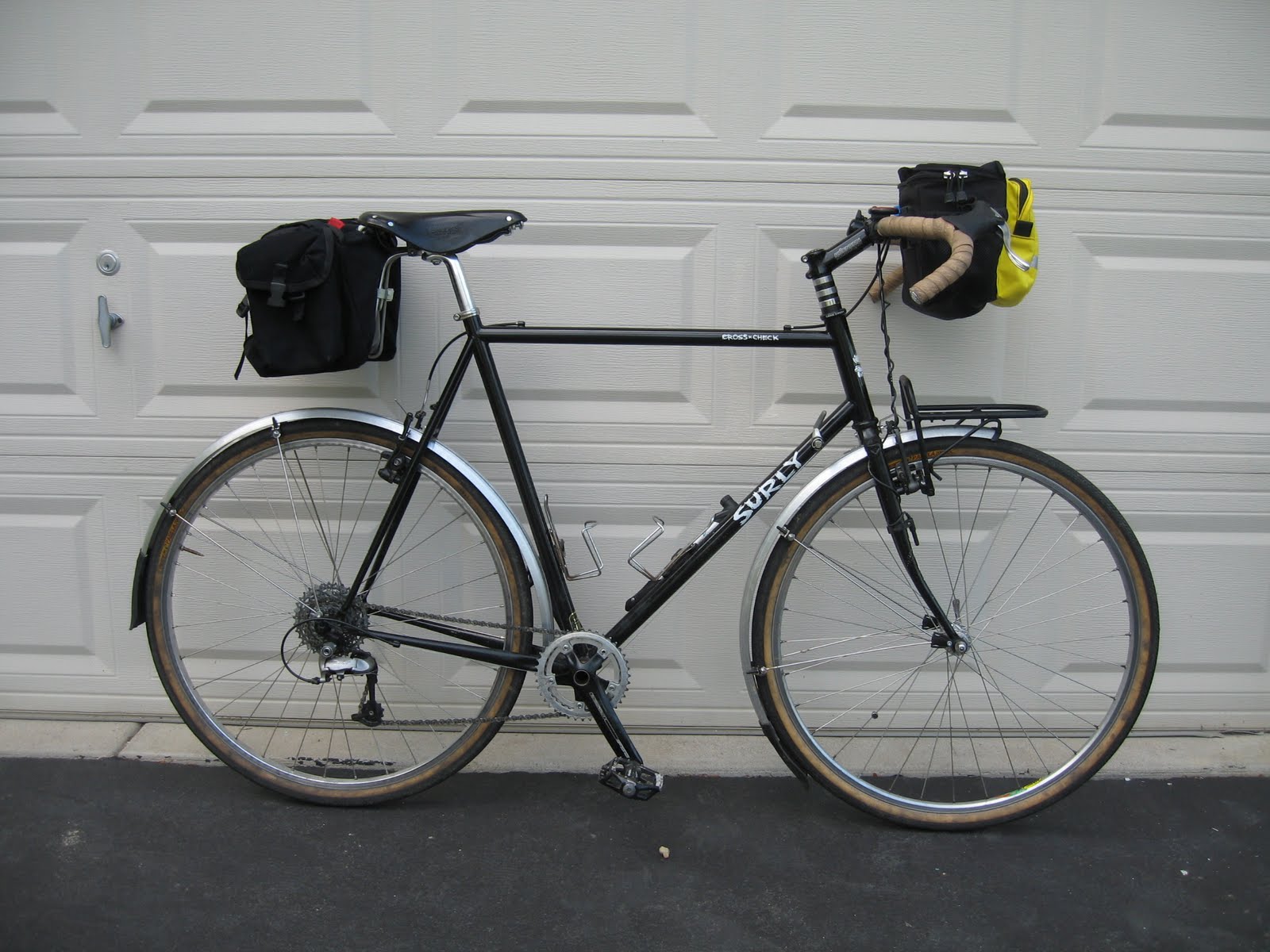 and I'm a little bit rock and roll: 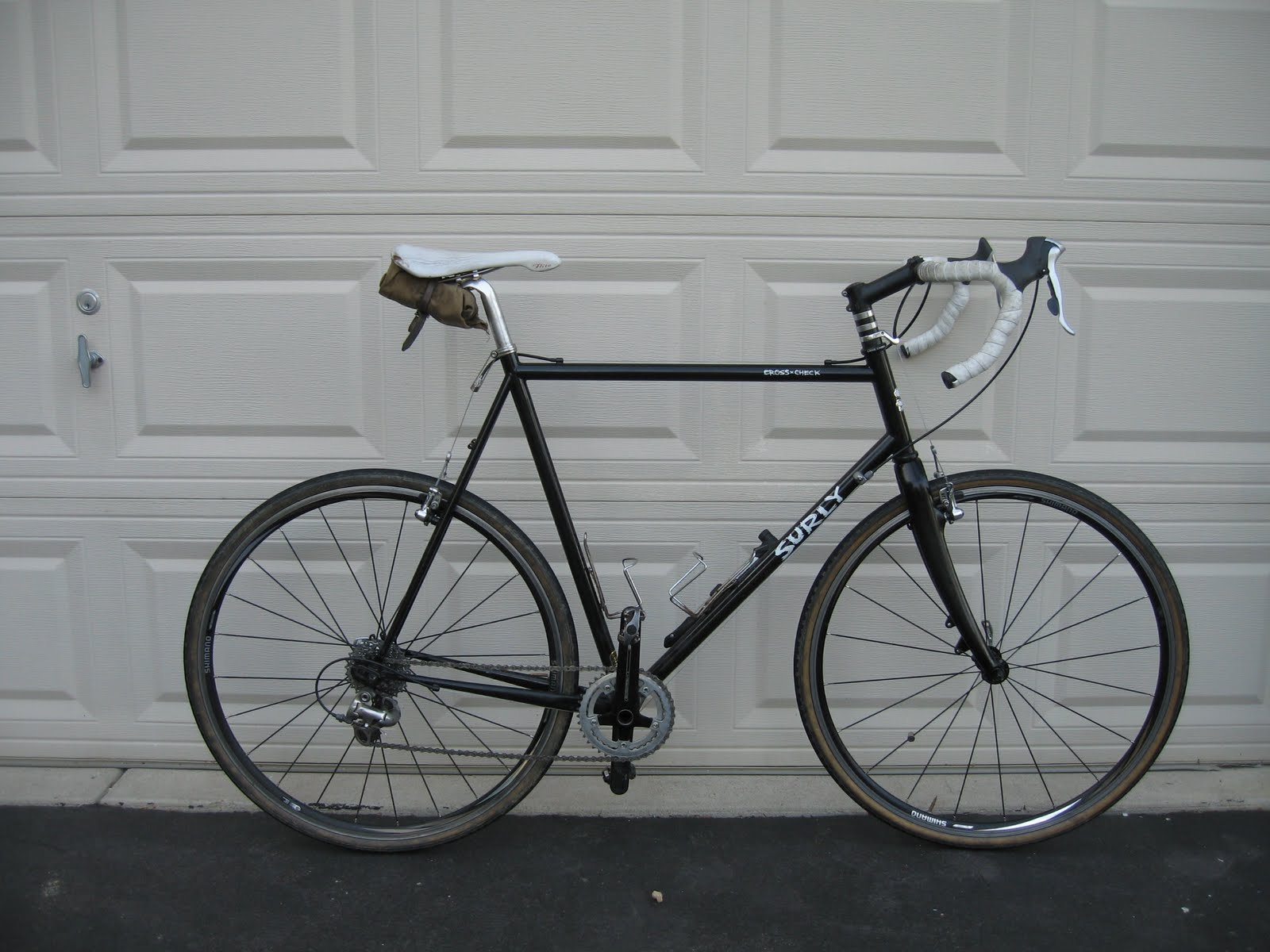 Part of this trick was the lack of a front derailer. Without it, I could pull the whole front end off as a module, without clipping any cables. Swap the saddle, pedals, and rear wheel, and go.

I also experimented with "Riv'ing" my CC out: 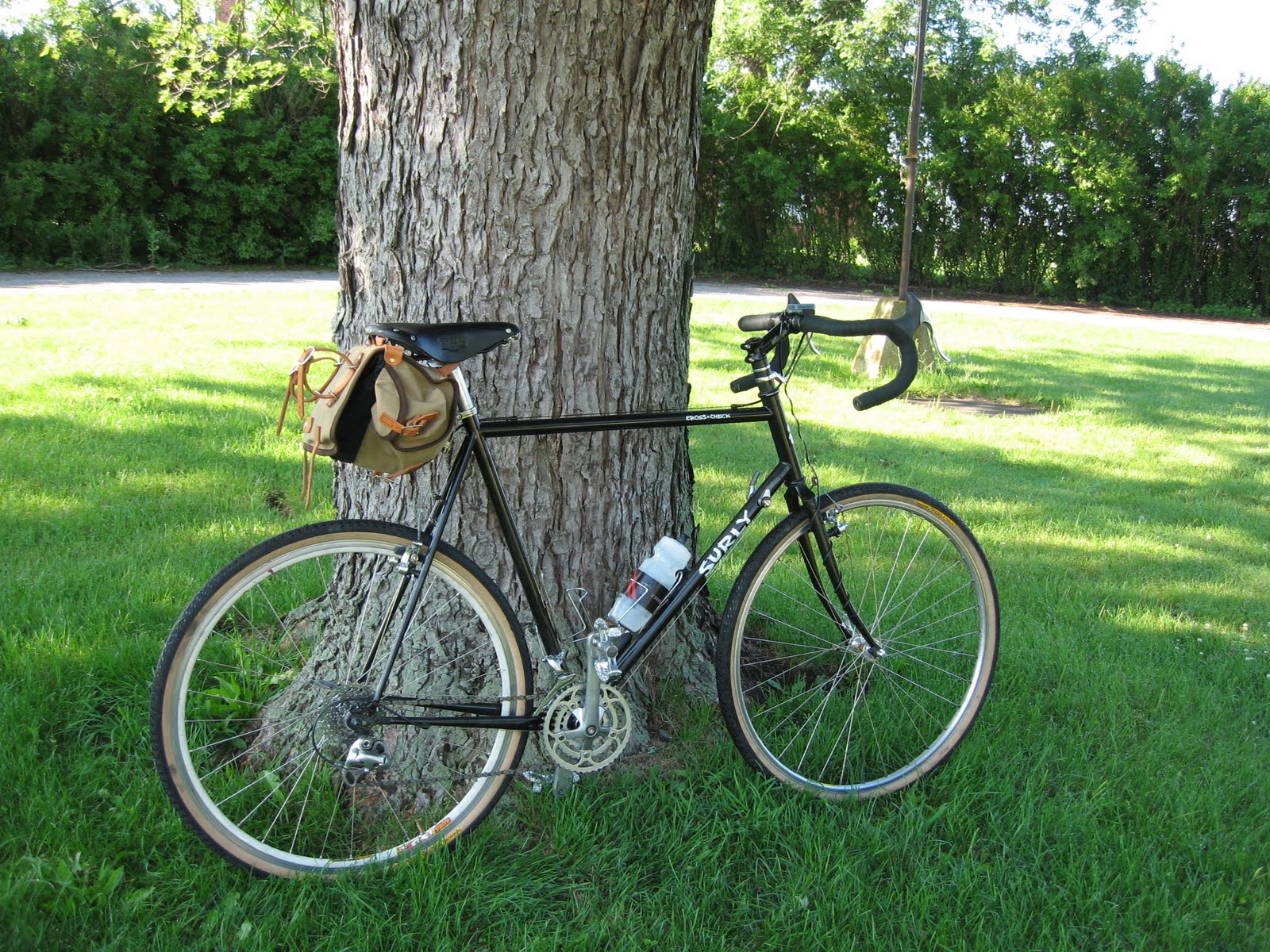 And later I tried it as an all around, multi purpose, road bike: 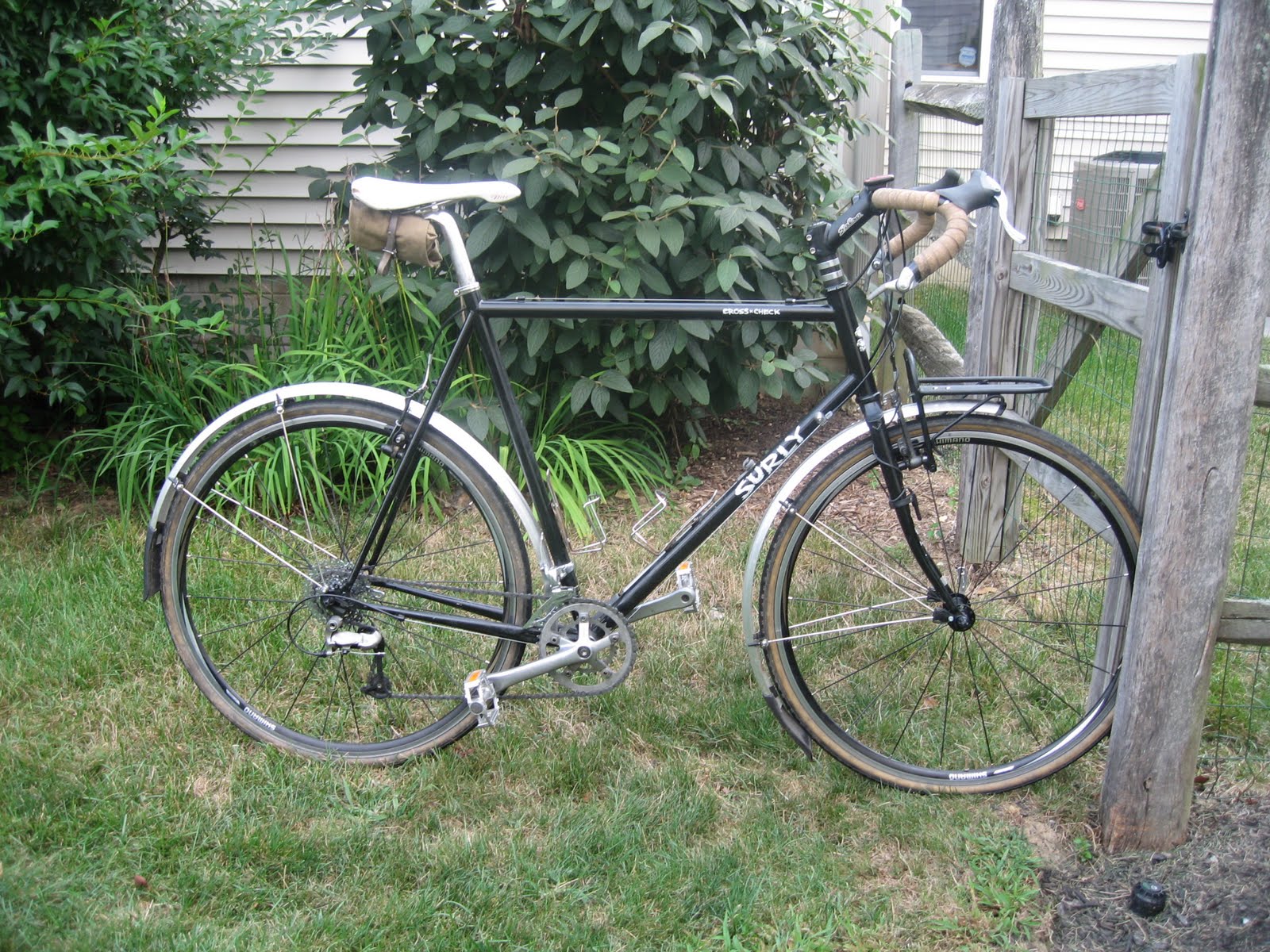 But the more I tried various drop bars, the more I've realized I'm just not that comfortable on them on the CC. The long and low front end of the CC doesn't help matters here. Also, with my mountain biking backgroud, I'm just more used to flat bars. Last fall, I built it up as a flat bar, geared, utility bike. Er, basically a hybrid, but a cool one: 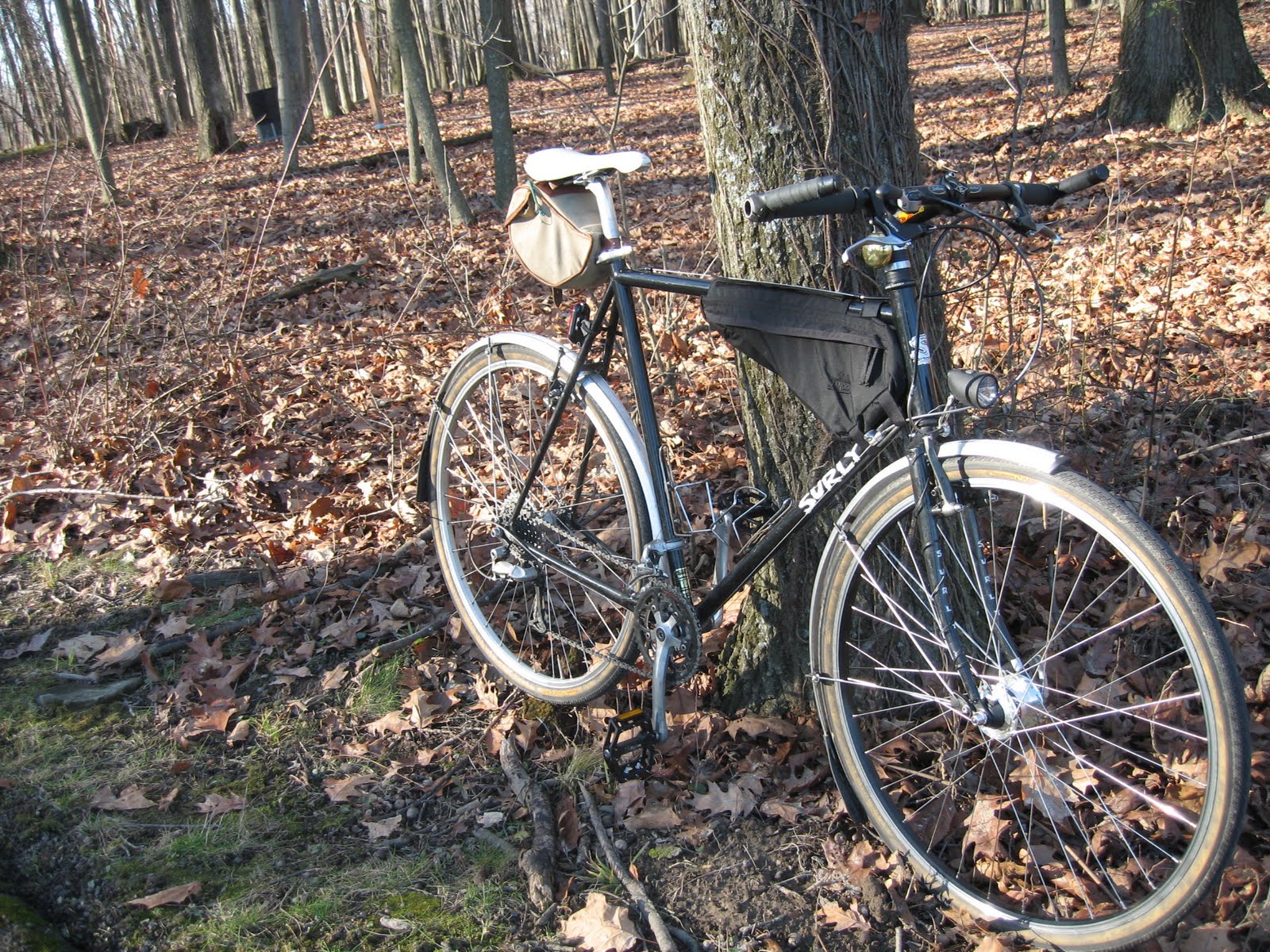 Of course, this year the Surly took a turn visiting the local playgrounds: 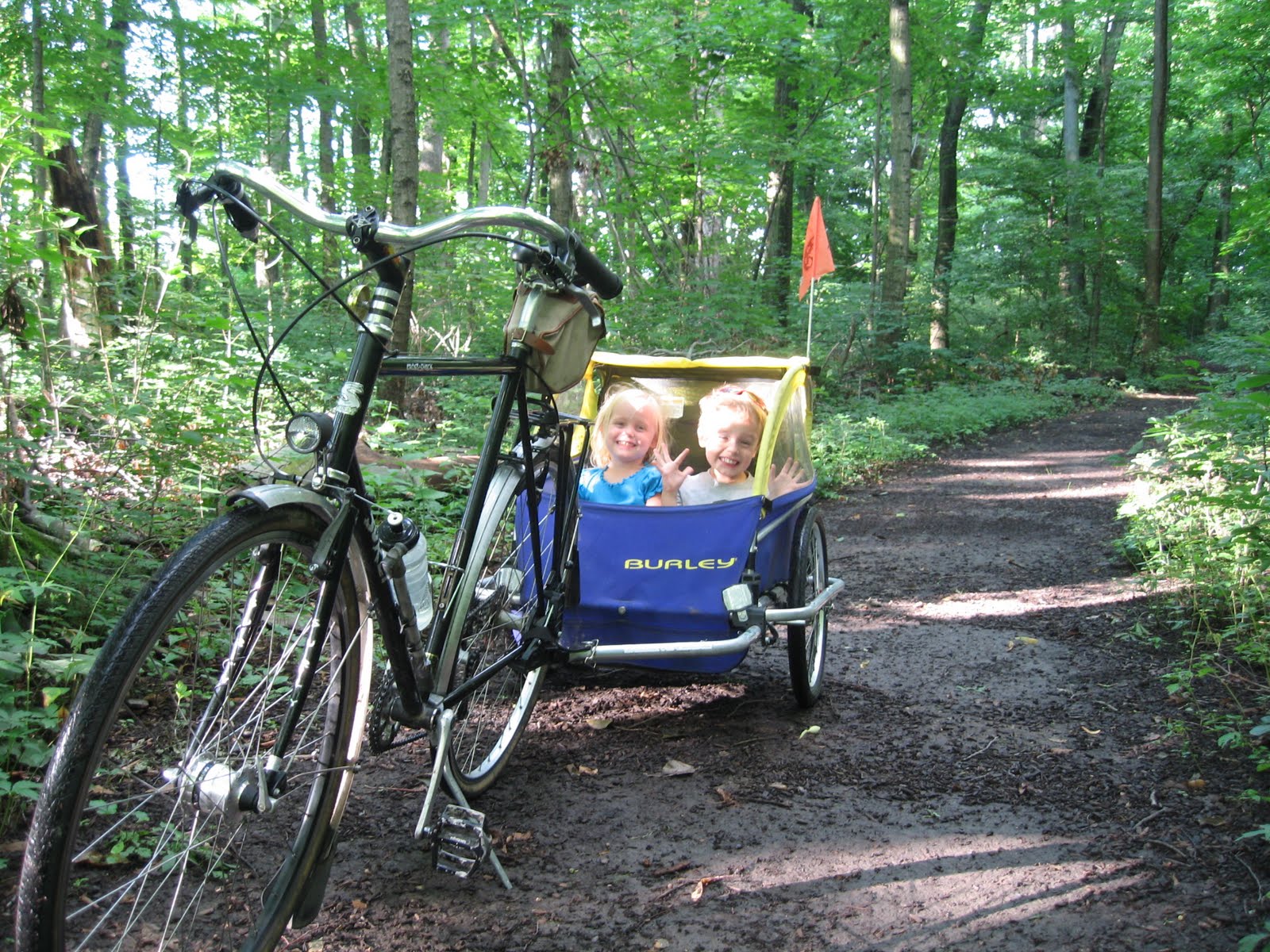 (As a side note, I think it looks more "Rivendellian" here than what I tried a few years earlier with drop bars)

I could certainly use the CC as my main utility/kid pulling bike, and when I think about downsizing my bike fleet, this is always an option. The problem is, as soon as I build up a geared configuration, it doesn't take much more than a week before I start missing the simplicity of the fixed gear. Which is why I currently have my Buzz and now my Gryphon competing for kid duties, while my Cross Check looks like this: 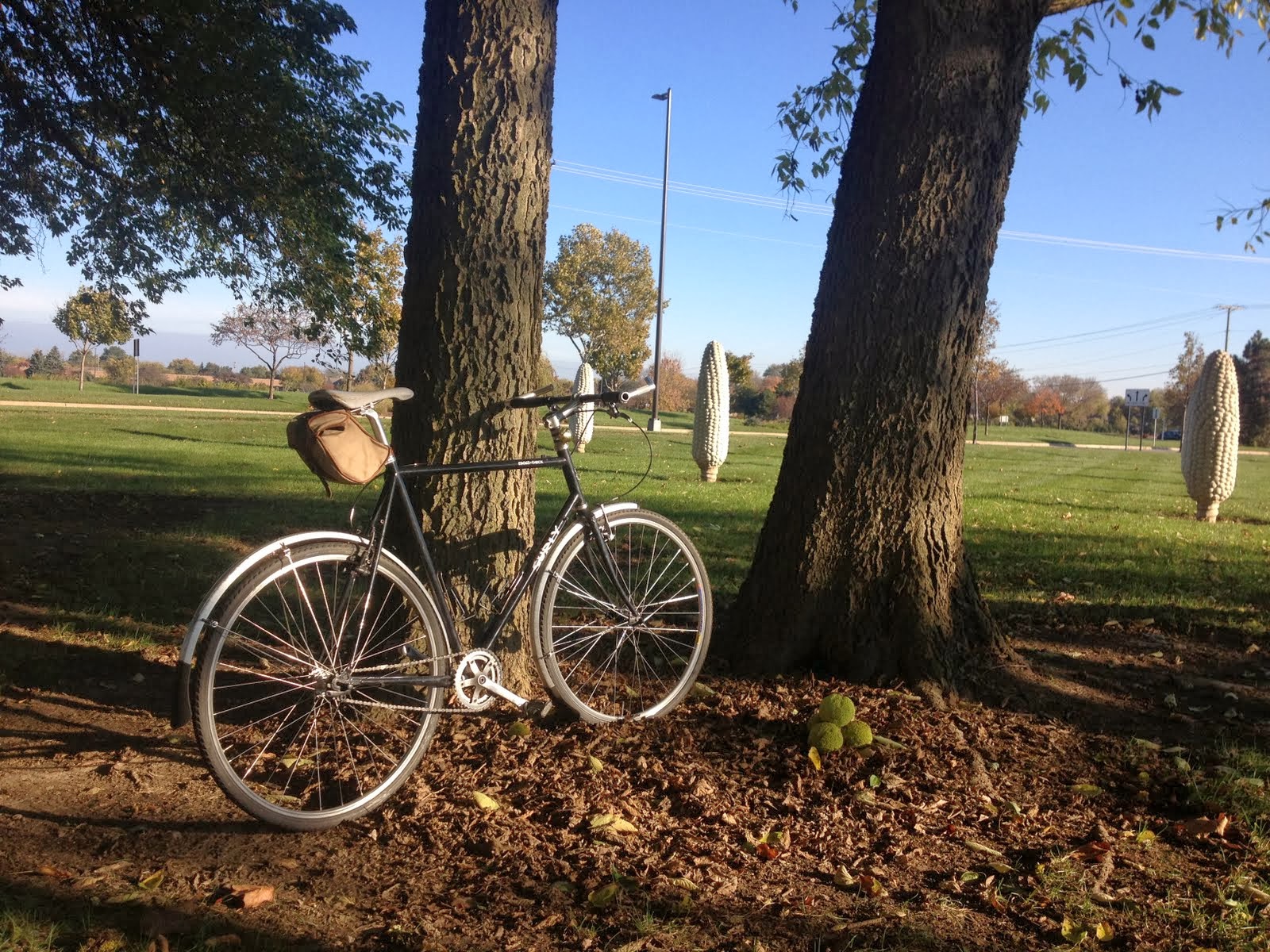 Thanks to Surly for designing such a great bike... especially for those of us who like to tinker.
at October 25, 2013

It's been a while since my last post, so you might imagine that I have had some turnover in my bike fleet. You would be correct.  I sold... 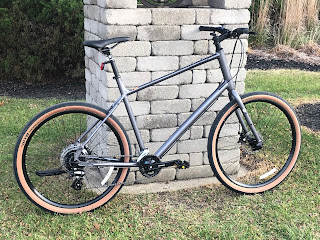