Scooting (Razor A5 vs. A6), and Folding Bikes

We got Henry a larger Razor scooter (the A6) for Christmas last year. He wasn't immediately taken with it, but Kate was very happy, since Henry would no longer be stealing her old Razor A5. But with the shutdown, he's using it more. During the early part of the shutdown, Henry and I took both scooters out for a ride around our neighborhood. It was fun, and a new form of exercise, even if there isn't a lot of dignity in an adult riding a kid's scooter. But as a guy who rides a bike with 20" wheels while wearing knickers, clearly I'm not too concerned about dignity.
So I ordered a Razor A6 for myself, then Kate wanted a new scooter as well, and suddenly the garage is a awash in scooters. A few weeks back, I had an idea for a "big scoot." I drove my car down to the Dublin rec center one Saturday morning (~7 miles away), and unfolded my Xootr to ride home: 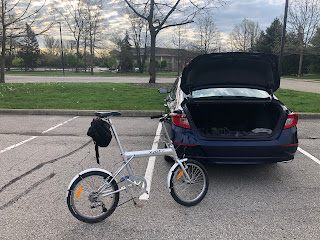 My bike stable is in a bit of an odd state right now. My bikes are in good form, but many of them aren't really quite right for me right now. Let's take them one by one, as usual in my rough order of preference at this point in time: 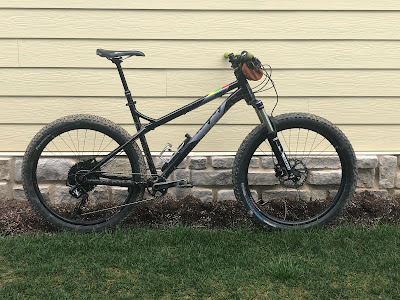 It's a bit odd to put this cheap, generic aluminum hardtail mtb on the top. I'm not mountain biking much these days, except for the pond loop behind our house. Certainly nothing that will challenge this long and slack hardtail with 120mm of travel up front.

But... I like cheap bikes that punch above their weight, and the Ragley is that. The bargain $80 Suntour fork works well, and the overall bike ride well, even though it's aluminum. Big tires help. I've been practicing my cornering technique (and my manuals) on our flat pond loop, learning my way around the new school geo on a trail that might work better with an older, 72 degree HA 29er.

I didn't have any major complaints with the Advent nine speed drivetrain I had on the bike, but a closeout special led me to upgrade to Box 11 speed:

It's a bit odd, but I find myself riding less than I thought I would during this coronavirus pandemic. Being home all the time, I thought I would be itching to get out. But the weather has been lousy, and a lot of my local riding is motivated by riding errands: returning books to the library, Kroger runs, stops for ice cream.

Much of that is gone, so I'm trying to find other reasons to ride. A few weekends back, Sam and I rode around town looking for little free libraries. I had some books to unload.

Our first stop was the nearby Tartan Ridge park near GRE. Nothing but kids' books there, so we kept on rolling. 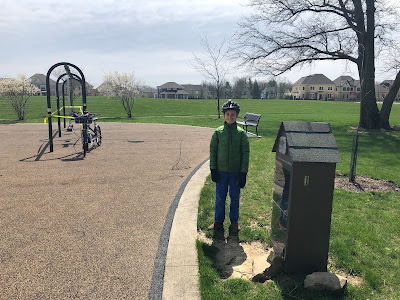 Often I get the urge to buy bike X. Usually, the intersection of this desire, my bike fund balance, and the availability of a deal on "X" don't coincide, so nothing happens. But sometimes, these three stars align, and a new bike rolls into my fleet. Recently, I decided I really wanted to try a Xootr Swift folder, to compare how its simpler fold stacks up against my Bike Friday (just in case anyone else is comparison shopping these two out of production models). Since Xootr stopped making bikes about three years ago, they're pretty thin on the ground. In this case, I pushed the celestial alignment a bit by putting a "wanted to buy" up on one of my bike email lists. Ryan from Seattle quickly responded with a nice price on a Swift, and I've had it about a month now.

Ryan's Swift was basically stock. A better blogger than I would have taken pictures of the stock condition, but I had a rainy afternoon off when I got it, so I immediately set to business to changing out parts from my stash. New tires, saddle, pedals, fenders, and five or six handlebar and stem combinations later, I ended up here: 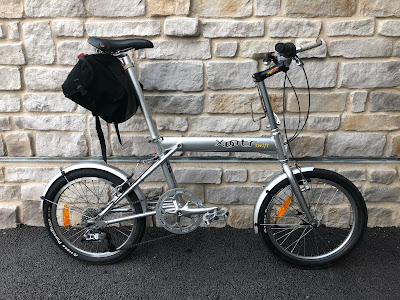 At one point this late winter, my bike fleet was effectively* down to just three bikes: my Bike Friday Crusoe, my Jones LWB, and my Ragley Marley (I say effectively because I'm not counting bikes for sale, or the tandem). The Crusoe fills the role of a road bike for me, and the Marley as the mountain bike, so I decided to turn the Jones into an all rounder. Again. This turned out to be a little prescient, as now with the coronavirus going on, I'm not sure I'll be doing all that much mountain biking in the near future. I've never had a serious crash off road, but it's probably my activity with the greatest potential. Now is not the time I want to visit a hospital.

Anyway, you can probably imagine the minor changes needs to turn the Jones from a capable mountain bike to a capable all around machine: gearing, tires, and a way to carry stuff. This is what I ended up with: 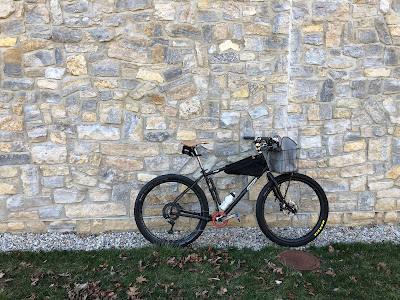 Late last year, I picked up a Bike Friday Silk from Craigslist up near Toledo. I was really impressed with the fold, but not so much with the ride. I didn't care for the complexity of the internally geared hub or the disc brakes. I offered it up for sale or trade on my various bike email lists, and ended up making a deal with Dan from Chicago. Over Christmas break, we met one Saturday in Indianapolis, about half way between us. The boys and I turned it into a road trip to visit Indy, though we ended up mostly just walking around downtown when we found out the 16 bit arcade is 21 and over only in Indiana. Dang. This is us at the downtown library: 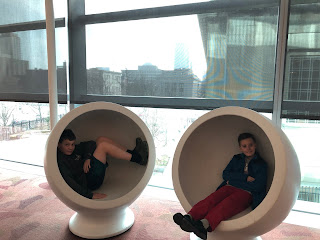 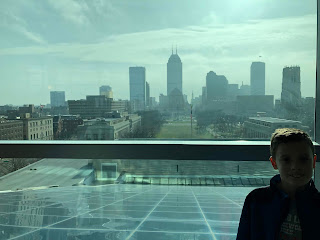 Anyway, it was still an excuse to listen to our Trojan War podcast and go out for a steak dinner. And to get my new bike, a Bike Friday Crusoe from the same generation as my Silk: 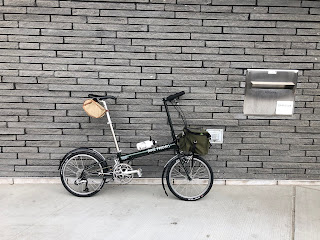 I've been tracking my mileage for a work challenge this winter. Since December, I've put on around three hundred miles on my various bikes. That's pretty good mileage, for me. What's interesting is my most ridden bike is the Trek tandem, with almost half those miles. This is because whenever I want to go for a ride, Sam is right there with me, and he always wants to take the tandem: 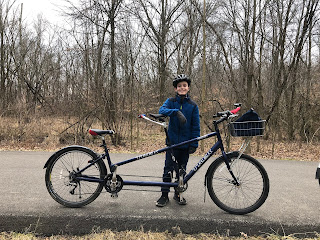 I've made some key changes that really helped turn this tandem from a painfully slow bike to one that's almost enjoyable to ride (considering it as a bike only, not commenting on my riding company!)

Scooting (Razor A5 vs. A6), and Folding Bikes

We got Henry a larger Razor scooter (the A6) for Christmas last year. He wasn't immediately taken with it, but Kate was very happy, sinc...